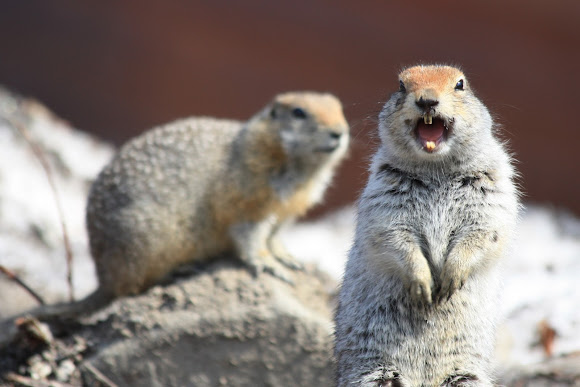 The diurnal Arctic ground squirrel lives on the tundra and is prey to the Arctic Fox, the Red Fox, wolverine, lynx, the Grizzly Bear, and eagles. It is one of the few Arctic animals, along with their close relatives the marmots[4] and the un-related little brown bat that hibernate.[5] In the summer it forages for tundra plants, seeds, and fruit to increase body fat for its winter hibernation. By late summer the male arctic ground squirrel begins to store food in its burrow so that in the spring[6] it will have edible food until the new vegetation has grown. The burrows are lined with lichens, leaves, and muskox hair. During hibernation, its brain drops to just above freezing, its core body temperature reaches temperatures down to -2.9°C[7] and its heart rate drops to ~1BPM. Peripheral, colonic, and blood temperatures become subzero by means of supercooling.

At Toklat government housing area. Male and female cuddling, and male turning at me to bark for intruding.

OK, cute yes... but they might as well be carrying sawed off shot guns. they are destructive little devils. give them space and they will seize it. Take my warning in the colder climates. they are the devil, do not let them in. Keep them in them in the wild at a distance. But they are nice to watch have a go at a parcel or two :D

This adorable picture is begging for a caption!