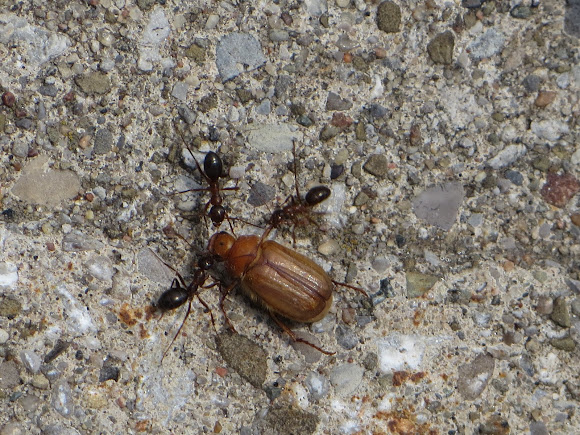 Unfortunately for this guy, the ants won. The life cycle takes about one year. Females lay 60 to 75 eggs underground in earthen balls over a period of about two weeks in mid-summer. The white egg at first is elliptical (1.5 mm by 2.1 mm) but becomes more spherical as the larva inside develops. These hatch into white grubs about 18 days after laying. The newly hatched larva is eight mm long and grows to a length of about 40 mm. Whitish with a brownish-black head, the grub has conspicuous brown spiracles along the sides of its body. They molt twice before winter. The third larval stage lasts nearly nine months, after which they pupate. They overwinter as grubs that may become active on warm winter days. They increase their activity in the spring. At night, the larvae may be found on the ground crawling on their backs. This form of locomotion is peculiar to the green June beetle. June beetles pupate in earthen cells several centimeters underground for about 18 days. The brown pupa, about the same shape as the adult, becomes metallic green just before the adult emerges. Adults appear in late spring to summer.[1] [3] Many June bugs die after becoming exposed to light for too long. They can be found dead in the morning under porch lights, and bright windows.