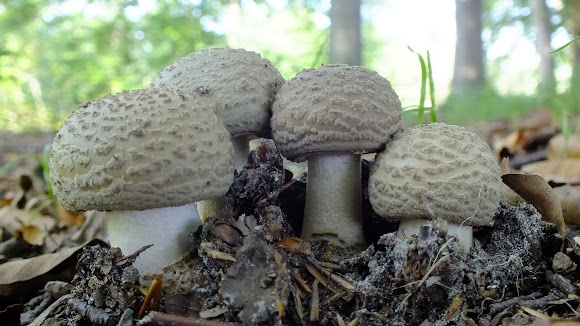 The grey spotted amanita is a mycorrhizal fungi growing in association with different trees. fruits are often found individually, but can also be found in small groups It begins growing in an egg-like sac called a volva, or universal veil. The caps of the grey spotted amanita range from a pale grey-brown colour to dark brown. They can reach between 8cm and 15cm, are domed at first and eventually flatten out. Grey patchy fragments of the veil/volva remain on the cap, though these can be easily washed away or wiped off. The white gills are crowded and adnexed. Sturdy and white in colour, the stem can reach 8 to 12cm tall, and is 1.5 - 2.5cm wide. It has a stem ring, or skirt, which has striated grooves on the upper surface. The stem surface above the ring often has striated grooves, although it can also be smooth. Below the ring, the stem surface is scaly. Only very young specimens has visible volval remains at the base of the stem. Instead, the base of the stem appears swollen.

Mycorhizal with hardwood and softwood trees, often most abundant near the edge of mixed woodland.

Spotted in a mixed forest on a hiking trail in Frieswijk, Holland. (sources: see reference)

Thank you, Maria dB! Your spotting is cool as well, also a little Amanita family :)

Cool spotting! I recently spotted a small group of these and your posting inspired me to include mine on Noah!