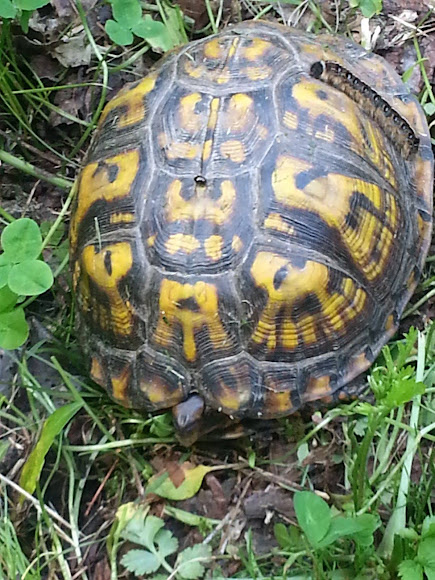 This box turtle is one of many that live on our mountain property. They live near my gardens and amongst the raspberry, blackberry, fruit orchards (including grapes). They eyes on this turtle was more a brown eyed color and a flat hinged plastron underneath. So I suspect it's a female. I've seen several around our property. "The Eastern Box Turtle is the most well-known turtle in Virginia. They are easily identified by their bright markings. Box Turtles have a high, dome-shaped carapace (top part of shell) and a hinged plastron (bottom part). They are usually dark brown or olive-colored with bright orange or yellow patterns. The male will usually have red eyes and the female will have yellowish-brown eyes. They can grow up to eight inches long. Box turtles have a down-turned beak. Box Turtles are omnivorous (eats plants and animals). They eat slugs, snails, earthworms, wild strawberries and blackberries, mushrooms, insects (such as grasshoppers and crickets), and carrion (dead animals, such as ducks or frogs). Other foods include, Snails,Foods The box turtle is an omnivore. Fruits include blackberry, mayapple, elderberry, sweet low-bush blueberry, maple-leaf viburnum, muscadine grape, white mulberry, wild strawberry, black cherry, and wineberry. Animals eaten are slugs, terrestrial snails, beetles, grasshoppers, caterpillars, flies, dusky salamanders, slimy salamanders. Mushrooms are also consumed. Captive turtles eat a wide array of food offered, in addition to the above. These include tomatoes, cantaloupes, mull berries, bananas, apples, plums, commercial grapes, earthworms, June beetles, mealworms, cockroaches, and hamburger. The box turtle has a low reproductive rate and is long lived. It requires 10-20 years to reach sexual maturity. Box turtles may sometimes live to over 100 years. Nesting occurs between late May and late July, with 2-7 eggs laid in one clutch per year."

Eastern Box Turtles are terrestrial, which means they live on land. They can be found in forests or meadows where there is moisture. Female box turtles will nest in the summer, laying three to eight eggs. Eastern Box Turtles hibernate in the winter, usually under dead leaves or inside old stumps.

STATE LAWS: http://aboxturtle.com/state_laws.htm http://www.dgif.virginia.gov/permits/gui... Females usually dig their nests on high ground on stormy evenings. Which is why you tend to see them crossing roads to find nest sites. Turtle populations are in danger in other states (including Maryland) because of pesticides, road kills and people taking them out of the wild for pets. Eastern Box Turtles will stay in the same area, as long as they have everything they need (food, water, other turtles to mate with). Some people used to test this by marking a turtle's shell to see if they could find the same turtle in later years. You should not do this, because you could damage the turtle's shell! Turtles need a healthy shell to survive. Box turtles are some of the only turtles which can completely close their shell, protecting them from predators. Another way to identify turtles, without hurting them, is to draw part of the pattern on their shell. Keep your drawing safe and take it out if you think you found the same turtle!