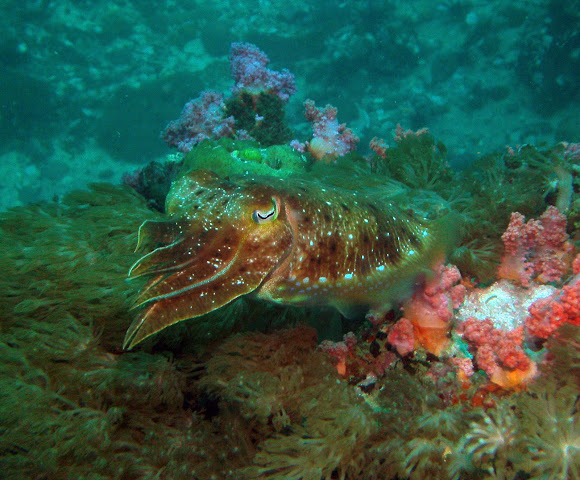 The broadclub cuttlefish is the second largest cuttlefish species after Sepia apama, growing to 50 cm in mantle length and 10 kg in weight. Like many cephalopods, the broadclub can be seen displaying a range of colors and textures. Commonly they are light brown or yellowish with white mottled markings. Males are sometimes dark brown, particularly during courtship and mating. The arms have longitudinal white bands that appear as broad white blotches when extended. Some arms have longitudinal brown bands that extend to the head. The dorsal mantle can sometimes be seen with a saddle mark with small white and brown spots. The dorsal mantle also has narrow brown transverse bands, and bold, white, transverse stripes and spots. The eyes are yellow around the ventral margins and the fins are pale with white, transverse stripes extending onto mantle and narrow, white bands along outer margins.

is widely distributed from the Andaman Sea, east to Fiji, and south to northern Australia. It is the most common cuttlefish species on coral reefs, living at a depth of up to 30 m. It is known to prey on shrimp and prawns of the genus Palaemon. They appear to mesmerize prey with their rhythmic colored bands.

Pic by my hubby. He´s just too lazy to post..

Thanks Marek, I will add it. I hope they let you keep the mission as worldwide :-)