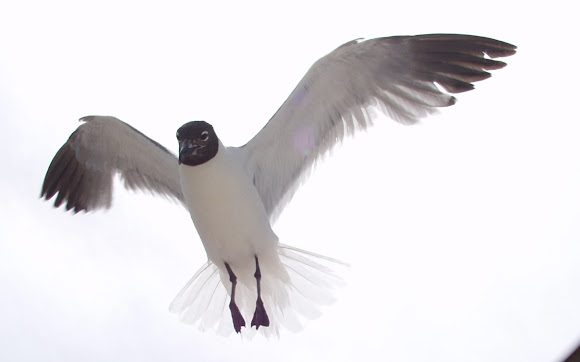 Habitat Prairie marshes and sloughs. Often feeds in plowed fields. Range Breeds on prairie marshes from southern Canada to South Dakota and Iowa; also in scattered marshes in West. Migrates to southeast and winters mainly along west coast of South America. Discussion A freshwater version of the Laughing Gull, Franklin's Gull will breed only in large colonies and so is sensitive to habitat destruction. When agriculture encroaches on a nesting marsh and it becomes too small for a large colony, the birds move elsewhere. They are much less numerous than in the past, but migrating flocks of these "Prairie Doves" are still a familiar sight in spring on

Beautiful but pesky when you're relaxing on the beach! I believe these are identified correctly as Franklin's Gull. They are very similar to Laughing Gull and Bonaparte Gull. They will easily steal a sandwhich right from your plate without hesitation!