Larval Procession of a Fungus Gnat 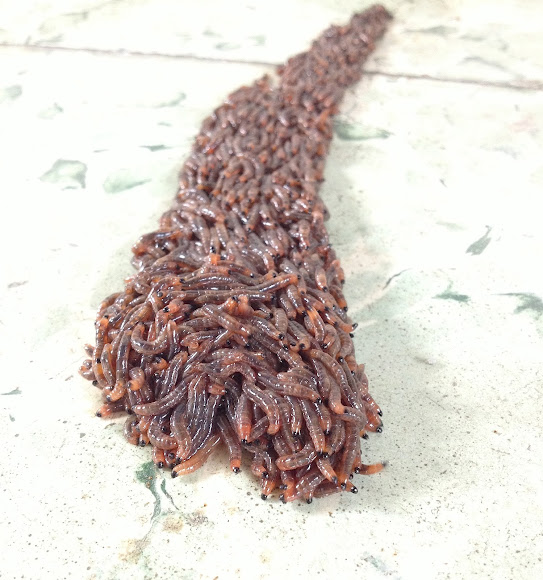 My daughter and I witnessed an incredible and rare larval procession (or migration) of fly larvae of the Family Sciaridae (Dark winged Fungus Gnats). I have never seen this happen before. We found them in an outdoor patio area of a house in the center of San Cristobal de Las Casas, Chiapas, Mexico (elevation 2,200 meters). It has been raining daily now since the rainy season began. The temperature was about 18º C. We didn't see the origin of the procession and don't know if they came in from the street or from the little central garden. They didn't seem to have a specific goal about where to go and advanced very slowly. The column was about 30 cm long at it's most stretched length (first pictures), wider in the front than in the back. Sometimes individuals were left behind. These stopped moving and probably die of exposure. There was a nest of Barn Swallows with 3 babies directly above the column. The birds ignored them as if they didn't realize what it was (or maybe thought it was a snake and dangerous?). We put a rock directly in front of the column (Picture 3) and this caused them to slow down, bunch up and then deviate away from the rock without ever coming in contact with it. This procedure also left a small group of larvae behind (visible in Picture 3) which stopped moving. We then put a piece of paper in front of the column to collect them (masons were working on the roof and they were in danger of being crushed or stepped on). This caused them to hesitate briefly and they then proceeded to move onto the paper. The column moves by allowing the top level of larvae to move forward over the bottom levels. These then end up on the bottom (see Video). The larvae secrete a mucus which allows them to slide easily on each other. However, they do not leave a mucus trail. We put the larvae into dirt, moistened them and are hoping they will pupate. The larvae in the mass on the dirt substrate are alive but no longer moving and are not spreading out or going into the soil (last picture). This was an incredible event to see. It is not known exactly why this happens sometimes nor what exactly triggers it. It is supposed that they are all last instar larvae and are possibly looking for a better place to pupate in a way that protects them from predators. These larvae normally feed on small amounts of fungal material in the soil.

Definitely go see the spotting by vipin.baliga of flies from this same family, the adults are emerging and mating from pupae. Very interesting and great photos! http://www.projectnoah.org/spottings/328... http://buginfo.com/article.cfm?id=83. http://bugguide.net/node/view/581033. http://www.naturamediterraneo.com/forum/...

Thank you Vipin, I was so happy to see your great pictures of similar adults!

What an interesting sight! A beautiful and fascinating documentation :-)

Thank you Neil for your kind words. We felt sorry for the ones left behind too and put them back into the pack. Maybe they stop moving when left behind so as not to be eaten and draw the attention from birds to the rest of the group.

You're such a softie Neil.

Now this is definitely the oddest thing I've seen in quite some time. How bizarre. An awesome spotting, brilliant notes, and cheers for the video. I feel sorry for the little ones left behind.

Thank you Tina. I really wonder too what motivates them to migrate. It doesn't seem to be a normal part of the life cycle of this fly and is rarely seen.

Great spotting. I think what stands out most for me, is that the ones that are left behind, no longer move. I wonder why that is and what motivates the mass migrations. Very interesting indeed.

Thank you Leanne, Karen, Benjamin, kittuandme, Maria and Mauna. It really was an extraordinary thing to see. Stop anyone dead in their tracks! :)

Thank you Brendan :) I didn't know what a Mortein Moment was until I looked it up and found it is a brand of insecticide. Actually, these are more beneficial than harmful, even though I don't think anyone wants this in their patio. The larvae feed on fungi and are great for soil aeration. :)

Thank you so much Mandy, Gilma, Rolo, Joshua, Jasmine and Ira. :)

What a fantastic spotting!

Yes..gross/creepy all you want..but AMAZING!! Thanks for sharing such an event, LaurenZarate.

That's gross! Still an amazing spotting. Thanks for all the info.

Thank you Mark, yes! It was definitely creepy looking......and slimy!