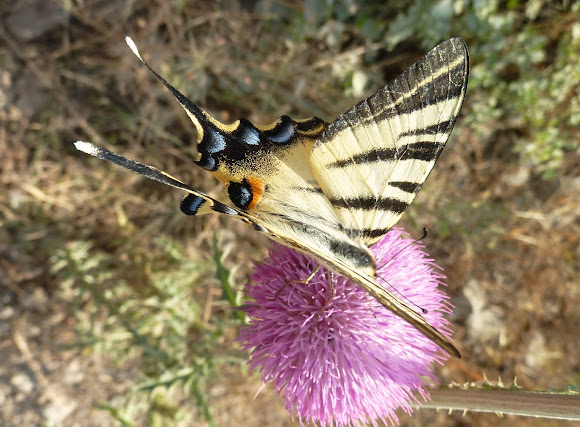 The caterpillars of the Scarce Swallowtail have been noted to leave silk trails from the permanent resting sites to feeding sites. This has been seen in both solitary and territorial larves with larvae having the ability to discern their trails from those of others. Research on pupae of Iphiclides podalirius in Spain indicates that the pupae manifest in two colours, green and brown, for the purpose of camouflage. The green pupae develop on hostplants and develop directly while brown pupae enter into diapause in the leaf litter. Pupating larvae tend to form green pupae before August while after August they tend to form brown pupae.

It is found in gardens, fields and open woodlands. It is widespread throughout Europe with the exception of the northern parts. Its range extends northwards to Saxony and central Poland and eastwards across Asia Minor and Transcaucasia as far as the Arabian peninsula, India, and western China. A few specimens of the Scarce Swallowtail have been reported from central Sweden and the UK but they were probably only strays and not migrants. The scarcity of UK migrants is responsible for the English common name. In the Alps it can be found up to altitudes of 1600 m.

In some years the Scarce Swallowtail is quite abundant. The Scarce Swallowtail is getting rarer as the blackthorn bushes are being cleared. The butterfly is now protected by law in Czech republic, Slovakia, Germany, Hungary, Luxembourg, Russia and Poland. It is considered Rare-Endangered and protected in some provinces of Austria and of status Indeterminate throughout Europe. Though referred by some authorities to be of status "Vulnerable", it is however unlisted in the IUCN Red List and the CITES appendices I, II and III. Other names: Sail Swallowtail, Pear-tree Swallowtail. Related spotting: http://www.projectnoah.org/spottings/906...