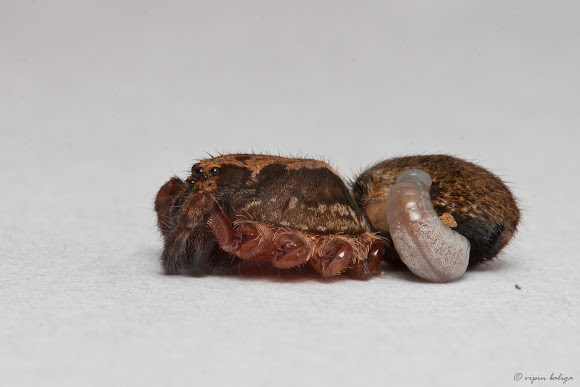 This is the sequel to my yesterdays' post : http://www.projectnoah.org/spottings/313... Which narrated the interesting breeding behavior of the Spider wasp which I observed. Here is some more facts about what was going on. A female wasp will search the ground and tree trunks for a spider, and upon finding one, will sting it, paralyzing the spider. Once the spider is paralyzed, the female wasp will make a burrow or take the spider to a previously made burrow. She will lay one single egg on the abdomen of the spider using her ovipositor, and then enclose the spider in the burrow.The egg will hatch and the larva will feed on the spider, breaking through the integument with its mandibles. Here is the interesting bit : As the larva feeds on its host, it saves the vital organs, such as the heart and central nervous system, for last. By waiting until the final larval instar, it ensures the spider will not decompose before the larva has fully developed. In the above picture the larva appears to be in the 4th instar. It has fed on all the limbs and is now digging into the abdomen. :-) I found this Spider wasp nest almost a year ago. Although it is not connected to my yesterdays post directly, the events that would have followed it would be the same. It was in between a fold among old flex banners. Oblivious to its existence, I unfolded the banner which caused the nest to be dropped onto the ground and it disintegrated into many pieces. Here I have tried to re-assemble the nest and show you guys how it might have appeared. :-) I cant help but think about the plight of this poor Spider. :-)