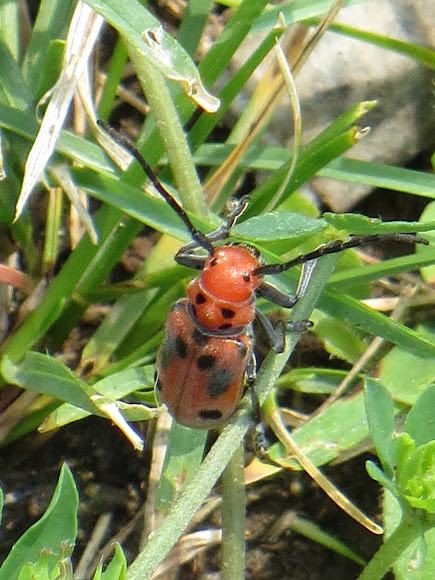 About 1.5 cm in length Tetraopes tetrophthalmus, commonly known as the red milkweed beetle, is a beetle in the family Cerambycidae. The binomial genus and species names are both derived from the Latin for "four eyes." As in many longhorn beetles, the antennae are situated very near the eye - in the red milkweed beetle, this adaptation has been carried to an extreme: the antennal base actually bisects the eye. The milkweed beetle, a herbivore, is given this name because they are generally host specific to milkweed plants (genus Asclepias). It is thought the beetle and its early instars derive a measure of protection from predators by incorporating toxins from the plant into their bodies, thereby becoming distasteful, much as the Monarch butterfly and its larvae do. The red and black coloring are aposematic, advertising the beetles' inedibility. There are many milkweed-eating species of insect that use the toxins contained in the plant as a chemical defense.