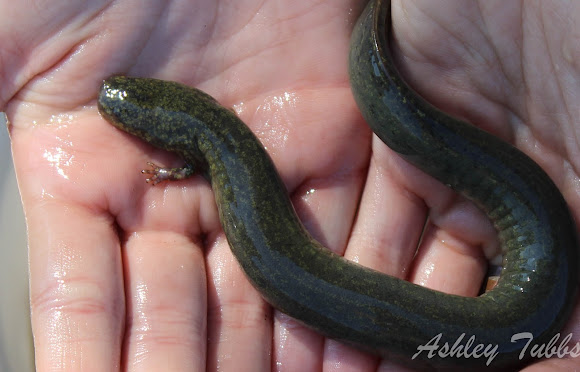 An eel-like salamander that only has front legs, which are tiny. All the other sirens I have seen were pretty much black, but this guy was green and black mottled, he was so pretty! They are very feathery, red gills that are exposed, and the eyes are greatly reduced because they live in murky water and don't rely on site. Unlike other salamanders, sirens make noises and can communicate to each through clicking.

Caught two of these in a marsh with a minnow trap. We kept them in a bucket with water, then would just lift them above the bucket for a few pictures then put them back for a bit before repeating, this prevented them from drying out. After about a 20 minutes photo shoot they were returned to the marsh.

Thanks Mark, Brendan, and glbnoah! These are always fun to find! And of course glbnoah, I always return everything to its home :)

Thanks for sharing and also returning the salamander to its home.