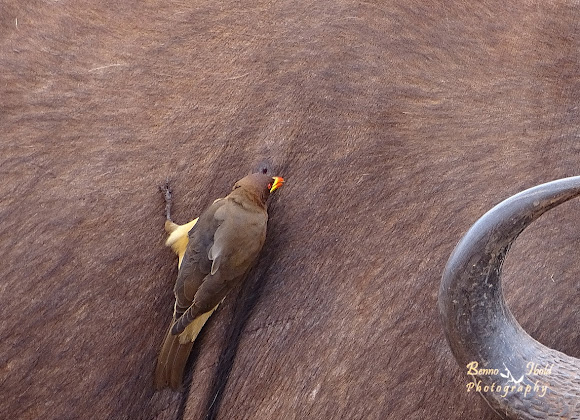 The yellow-billed oxpecker is 20 cm long and has plain brown upperparts and head, buff underparts and a pale rump. The feet are strong. The adults' bills are yellow at the base and red at the tip, while juveniles have brown bills. Its flight is strong and direct.

Big mammals of several species. The yellow-billed oxpecker nests in tree holes lined with hair plucked from livestock. It lays 2–3 eggs. Outside the breeding season it is fairly gregarious, forming large, chattering flocks. Non-breeding birds will roost on their host animals at night.

The yellow-billed oxpecker eats insects and ticks. Both the English and scientific names arise from this species' habit of perching on large wild and domesticated mammals such as cattle and eating arthropod parasites. It will also perch on antelopes such as wildebeest. In a day an adult will take more than 100 engorged female Boophilus decoloratus ticks or 13,000 larvae. However, their preferred food is blood, and while they may take ticks bloated with blood, they also feed on it directly, pecking at the mammal's wounds until blood flows. Whatever the net result, mammals generally tolerate oxpeckers

Great series of photos, fascinating to see the holes 'drilled' into the animals skin.