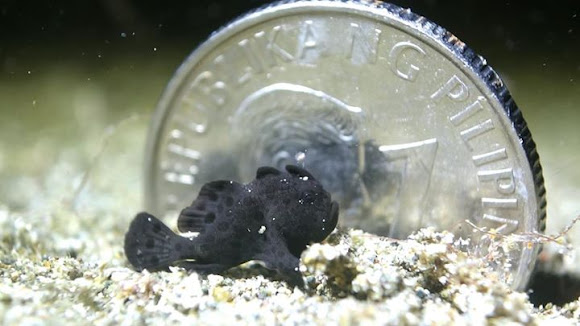 The painted frogfish grows up to 30 centimetres (12 in) long. Like other members of its family, it has a globulous, extensible body, with soft skin is covered with small dermal spinules. Its skin is covered partially with few, small, wart-like protuberances, some variably shaped, scab-like blotches and many small eye spots (ocelli) which look like sponges holes. Its large prognathous mouth allows it to consume prey its same size. The coloring of the body is extremely variable because they always tend to match their living environments. Frogfishes have the capacity to change coloration and pigment pattern in few weeks. However, the dominant coloration goes from white to black, passing through a whole range of related nuances such as cream, pink, yellow, red, and brown, usually with circular eye spots darker than the background color and/or with saddles and blotches. Some specimens can easily be confused with Antennarius maculatus. These characteristics can help to separate the two close species: usually, A. maculatus has red or orange margins on all fins, and sometimes a spike of the saddle blotch starts posterior to the eye, numerous warts on the skin, andfew or no ocellis; A. pictus has also three eye spots on its caudal fin. Juveniles can have a dark background color with small yellow spots. The first dorsal spine, the [illicium]], is modified and is used as a fishing rod. Its extremity is endowed with a characteristic esca (lure), which looks like a small fish with a pinkish to brownish coloration. The illicium is twice the length of the second dorsal spine and its often darkly banded. The second dorsal spine is practically straight and is mobile, and the third one is bent towards the back of the body; both are membranously attached to the head. They are well separated from each other and from the dorsal fin. The pectoral fins are angled and help, with the pelvic fins, to move the frogfish on the bottom and to keep a stable position for ambush.

The coin was placed next to the frogfish for size reference. The diameter of the coin is around 2.5cm, the frogfish is less than 1.5cm in size.

Thanks, @Melanie for sharing my picture :)

Fun fact! The males of some species of anglerfish, an order that includes this diminutive painted frogfish, live solely to find and mate with a female. They are significantly smaller than the females, and have poorly developed digestive systems that scientists believe to be insufficient to sustain them into adulthood, and so they rely on quickly finding a female in order to survive. On finding a female, the male bites into her skin and releases an enzyme that digests the skin of his mouth and her body, fusing the pair down to the blood-vessel level. He then slowly atrophies, first losing his digestive organs, then his brain, heart, and eyes, and ends as nothing more than a pair of gonads, which release sperm in response to hormones in the female’s bloodstream indicating egg release. It is not unusual to find females with multiple males attached in this way. https://upload.facebook.com/projectnoah/...

Not sure what you meant by your strobe getting hidden behind coral.
Strobe lights placement is adjustable depending on the arms you have.
As for your pictures being dark, you have to check if the strobe fires or if your settings (apperture & shutter speeds) is suitable for the subject you are taking.
Good luck with it and look forward to see your postings.

Yes, I was using external strobes and they kept getting hidden behind coral and I had no idea why my pictures were so dark! I got one picture that was half-lit-- not very good, but enough to encourage me to continue! Haven't posted them yet.

Thanks, @duttagupta :), glad that you are taking up underwater photography and enjoying it.

Underwater photography can be more difficult than land photography for several reasons, among which is lighting. You need external lighting (strobes) to have better chance of getting well lighted pictures, otherwise, you do get a lot of back scatters in your pictures.

I just realized, this is even cooler because I've seen grown frogfish and they're a lot bigger!

I went scuba diving recently and took my first photographs underwater, which was very exciting! My lighting was frankly terrible as the lamp kept getting caught behind coral (I was borrowing from some one) but I hope that I can take pictures as good as yours one day!

So cool, glad you found that tiny guy

:/ I know. I didn't want to buy a really expensive underwater camera since I'm only going to use it this one time. At least in the next few years. After I'm done with school, who knows where I'll end up and may be somewhere that I can dive a lot! I'm definitely going to take photos of the big stuff, I hope I can find nudibranchs!

Yes, I hope so for you too, @Ashley but your gopro camera will not be take good macro underwater :(, I understand they are coming up with wetlens for macro.

Try to look for something slightly bigger first, like nudibranch, they are very colorful. Unless your Guides are very good at spotting the small stuff, otherwise, it can be very challenging to find them.

I hope I can find tiny things like this when I am diving this summer!

@Ashley, when you are into underwater macro photography, you want to see the smaller the better :) and I have seen several baby frogfishes that are smaller than this one.

And nudibranchs, lots of tiny ones too, like around 3-4mm in size.
Also Shrimps :), check out this other spotting :

Albert, how do you see these tiny things?? This is a great photo of such a tiny little guy!