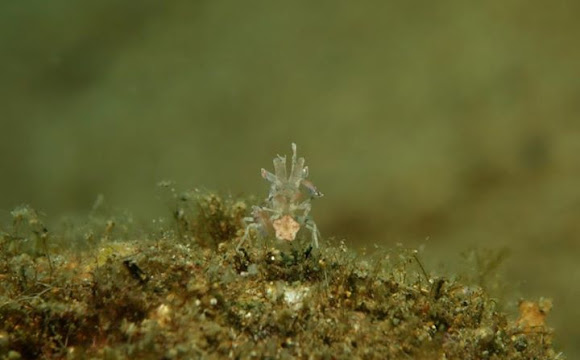 Hymenocera picta, commonly known as the harlequin shrimp, is a species of saltwater shrimp found at coral reefs in the tropical Indian and Pacific oceans. It is usually considered the only species in the genus Hymenocera, but some split it into two species: H. picta from the central and east Pacific where the spots are deep pinkish-purple with a yellow edge, and H. elegans from the Indian Ocean and west Pacific where the spots are more brownish and have a blue edge. They reach about 5 centimetres (2.0 in) in length, live in pairs and feed exclusively on starfish, including crown-of-thorns starfish. It does seem to prefer smaller, more sedentary starfish, but as these generally are not sufficiently numerous for its needs, it commonly will attack Acanthaster, both reducing its consumption of coral while under attack, and killing it within a few days

This is a tiny Juvenile Harlequin Shrimp, probably around 3-4mm in size! What's special of this spotting is that this tiny Harley is holding on to an even tinier star fish, which it will feeds on!

Thanks, @Lauren. Was just lucky to find it :)

Yes, exactly, @Ashley :)
I didn't noticed the tiny seastar it was holding when I took the picture or during the dive. It was only when I review the picture that I noticed it. If you noticed, the color of the seastar is quite similar to the Shrimp.

That's incredible! I would have never even realized that was a starfish if you hadn't mentioned it!