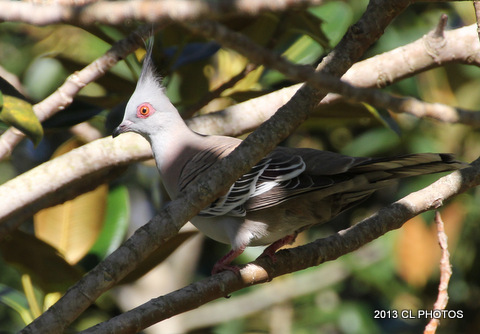 The Crested Pigeon is a stocky pigeon with a conspicuous thin black crest. Most of the plumage is grey-brown, becoming more pink on the underparts. The wings are barred with black, and are decorated with glossy green and purple patches. The head is grey, with an pinkish-red ring around the eye. If startled, this pigeon takes to the air with a characteristic whistling flight, and glides with down turned wings. The whistling sound is produced by the air passing over a modified primary feather on the wing. Upon landing, the pigeon swings its tail high in the air.

Distribution: The Crested Pigeon is native to Australia and is common throughout most of the mainland. Habitat: The Crested Pigeon is found in lightly wooded grasslands in both rural and urban areas. It is usually found in the vicinity of water, as it has to drink every day, and is absent from the denser forests. Feeding: The Crested Pigeon's diet consists mostly of native seeds, as well as those of introduced crops and weeds. Some leaves and insects are also eaten. Feeding is in small to large groups, which also congregate to drink at waterholes. Birds arrive in nearby trees, and often sit for long periods before descending to drink. Drinking and feeding are most common in morning and evening, but can occur at any time. Breeding: The Crested Pigeon builds a delicate nest of twigs, placed in a tree or dense bush. Both sexes share the incubation of the eggs, and both care for the young.