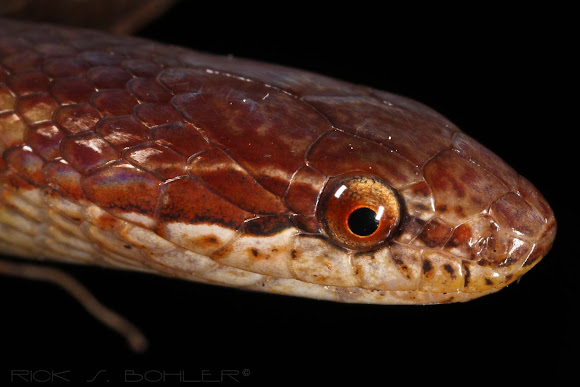 Pine woods snakes are small, slender snakes, ranging from 10 – 13 in (25 – 33 cm). Coloration is generally brownish, ranging from golden brown to reddish brown with a darker head and lighter venter. There is a dark stripe passing through the eye and the upper lip scales are yellowish, leading to one of its common names, the yellow-lipped snake.

Pine woods snakes are found in scattered populations throughout the Coastal Plain in the southeastern U.S. they are common in a few sections of Florida. The most inland populations that have been discovered are in South Carolina on the Savannah River Site. Pine woods snakes can be found in a variety of woodland habitats and are apparently particularly common around wetland margins. Like other small fossorial snakes this species is most often found in rotting logs, under tree bark, in loose soil, or under leaf litter.

Little is known about the ecology of this uncommon snake. They are generally fossorial (live underground) and are most often found hiding beneath logs, leaf litter, or other debris. Pine woods snakes have been known to eat small frogs, salamanders, snakes, and small lizards. Although not dangerous to humans, this species has toxic saliva that it uses to subdue its prey. Pine woods snakes lay 1 – 4 eggs in spring or early summer.

Thanks Jeffrey and Jared