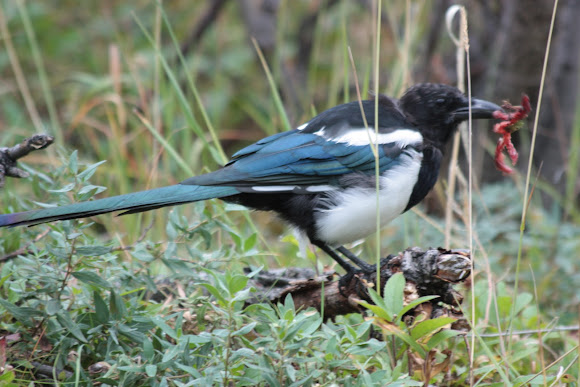 The Black-billed Magpie (Pica hudsonia) is a bird in the crow family that inhabits the western half of North America. It is notable for its domed nests, and for being one of only four North American songbirds whose tail makes up half or more of the total body length (the others being the Yellow-billed Magpie, the Scissor-tailed Flycatcher, and the Fork-tailed Flycatcher)

Black-billed Magpies range in the north from coastal southern Alaska, central British Columbia, and the southern halves of Alberta, Saskatchewan, and Manitoba, through the Rocky Mountains down south to all the Rocky Mountain states including New Mexico, Colorado, Wyoming, Idaho, and some bordering states as well. The range extends as far east as Minnesota and Iowa, but is thought to be limited further east by high temperature and humidity.[5][6] Black-billed Magpies frequent open country with thickets and scattered trees, especially riparian groves. They can be found within cities and suburbs as well.

eating some sort of red meat by Savage River.