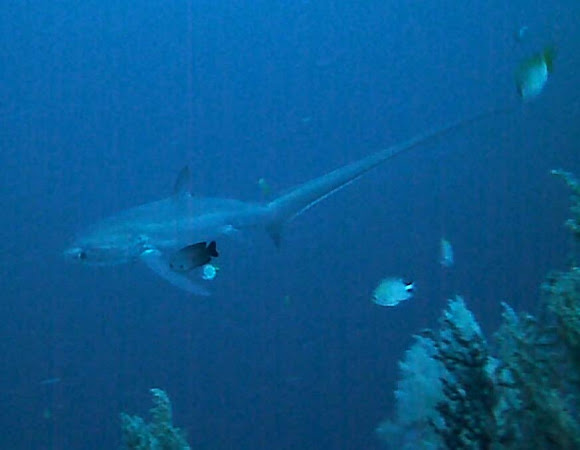 Named for and easily recognised by their exceptionally long, thresher-like tail or caudal fins (which can be as long as the total body length), thresher sharks are active predators; the tail is actually used as a weapon to stun prey. The thresher shark has a short head and a cone shaped nose. The mouth is generally small, and the teeth range in size from small to large. At just 3 m (10 ft), the pelagic thresher, Alopias pelagicus, is the smallest. Thresher sharks are fairly slender, with small dorsal fins and large, recurved pectoral fins. With the exception of the bigeye thresher, these sharks have relatively small eyes positioned to the forward of the head. Coloration ranges from brownish, bluish or purplish gray dorsally with lighter shades ventrally. Their diet consists of pelagic schooling fish (such as bluefish, juvenile tuna, and mackerel), squid and cuttlefish are the primary food items of the thresher sharks. They are known to follow large schools of fish into shallow waters. Crustaceans and the odd seabird are also taken.

Although occasionally sighted in shallow, inshore waters, thresher sharks are primarily pelagic; they prefer the open ocean, venturing no deeper than 500 metres (1,600 ft). In Malapascua there are a couple of cleaning stations in the dive site Monad Shal where the sharks regularly show up in the very early morning.