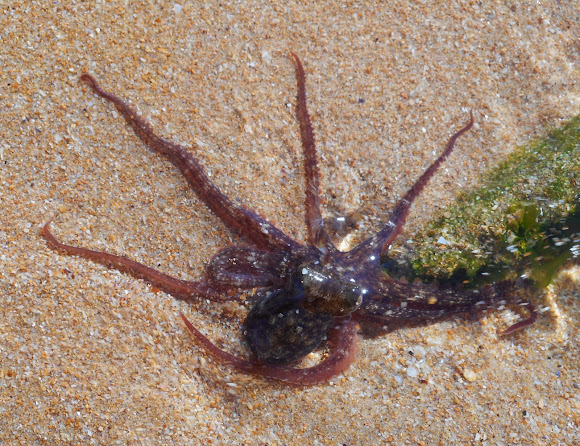 I'm pretty sure this is an adult Greater Blue-ringed Octopus (Hapalochlaena lunulata), a highly-venomous and deadly marine species. Colours vary (depending on mood, activity, and surroundings), and as this specimen wasn't being threatened in any way, perhaps the characteristic blue rings weren't displayed. The lightish-brown colour is common when the animal is inactive. It was very small, and definitely less than 20 cm across with fully-extended tentacles. A less-likely ID possibility is this could be a very young Common Sydney Octopus (Octopus tetricus), also known to occur in these coastal waters. The adults of this species can have an armspan that reaches over two metres.

Spotted drifting along a sandy channel on a rock platform, at North Avoca Beach on the NSW Central Coast. High tide and massive pounding surf possibly flushed this specimen from its rock pool haven.

Thanks. I've been coming to this beach since I was a babe in arms, and that's over 50 years. My first ever spotting of this species.