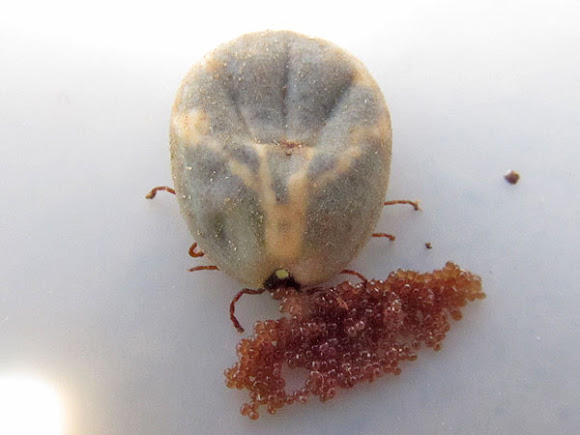 The lone star tick is the most common tick species in central Virginia. Females are identified by a whitish spot on the scutum (shield). This fully engorged female was removed from a dog then kept in a vial. After six days in the vial, it began to lay eggs. The ruler in the second picture shows centimeters.

Lone star ticks can be found anywhere there are mammals to serve as hosts, including woods, meadows and gardens.

Lone star ticks are known vectors of tularemia and ehrlichiosis, but do not transmit Lyme disease. A poorly understood condition called southern tick-associated rash illness (STARI) is also caused by lone star tick bites, but the mechanism of infection is unknown (attempts to connect the disease with Borellia longstari have been unsuccessful). Some people bitten by lone star ticks develop an allergy to meat (from mammals, not poultry or fish). Shameless plug: My Parasitology students (high school juniors and seniors) built and launched a Web site about ticks: http://ticks-pbl.weebly.com/ Feel free to have a look and send a comment via the Comments page.

Thanks Neil. I feel lucky to have caught her in the act.

Thanks, Christine and Cammie!

That is disgusting, but so cool!