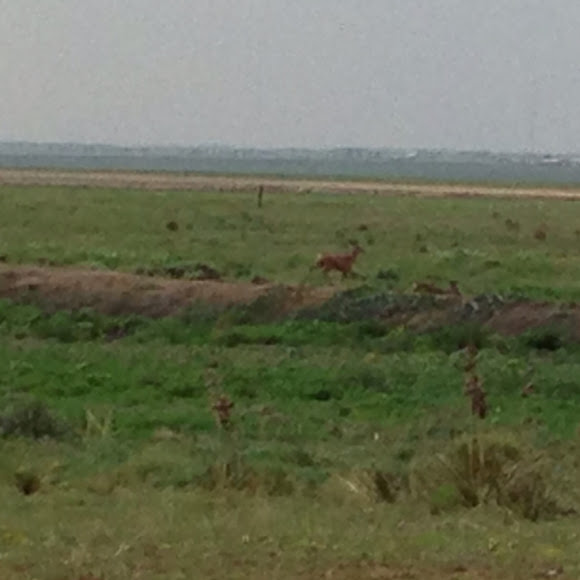 The most noticeable differences between white-tailed and mule deer are the size of their ears, the color of their tails, and the configuration of their antlers. In many cases, body size is also a key difference. The mule deer's tail is black-tipped, whereas the whitetail's is not. Mule deer antlers are bifurcated; they "fork" as they grow, rather than branching from a single main beam, as is the case with whitetails. Each spring, a buck's antlers start to regrow almost immediately after the old antlers are shed. Shedding typically takes place in mid-February, with variations occurring by locale. Although capable of running, mule deer are often seen stotting (also called pronking), with all four feet coming down together. The mule deer is the larger of the two Odocoileus species on average, with a height of 80–106 cm (31–42 in) at the shoulders and a nose-to-tail length ranging from 1.2 to 2.1 m (3.9 to 6.9 ft). Of this, the tail may comprise 11.6 to 23 cm (4.6 to 9.1 in). Adult bucks (male deer) normally weigh 55–150 kg (120–330 lb), averaging around 92 kg (200 lb), although trophy specimens may weigh up to 210 kg (460 lb). Does (female deer) are rather smaller and typically weigh from 43 to 90 kg (95 to 200 lb), with an average of around 68 kg (150 lb). Unlike the whitetail, the mule deer does not generally show marked size variation across its range, although environmental conditions can cause considerable weight fluctuations in any given population.

Spotted a small herd of deer while out on the border of Texas and New Mexico. They were bedded down near a road and when we passed they all got up and headed away.