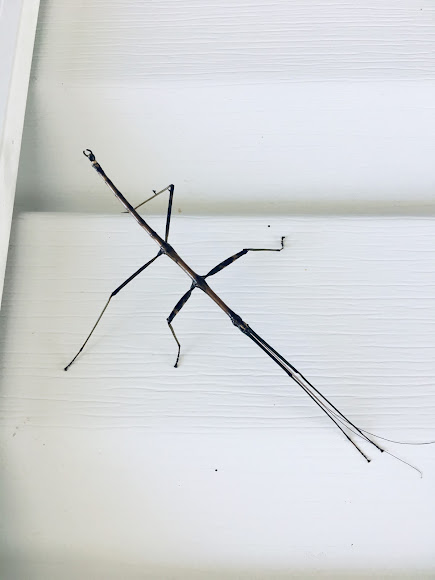 The Phasmatodea (also known as Phasmida or Phasmatoptera) are an order of insects whose members are variously known as stick insects, stick-bugs, walking sticks or bug sticks. They are generally referred to as phasmatodeans, phasmids, or ghost insects. Phasmids in the family Phylliidae are called leaf insects, leaf-bugs, walking leaves, or bug leaves. The group's name is derived from the Ancient Greek φάσμα phasma, meaning an apparition or phantom, referring to their resemblance to vegetation while in fact being animals. Their natural camouflage makes them difficult for predators to detect; still, many species have one of several secondary line of defence in the form of startle displays, spines or toxic secretions. The genus Phobaeticus includes the world's longest insects.

He was just hanging out on the siding of my house. Underneath the porch.