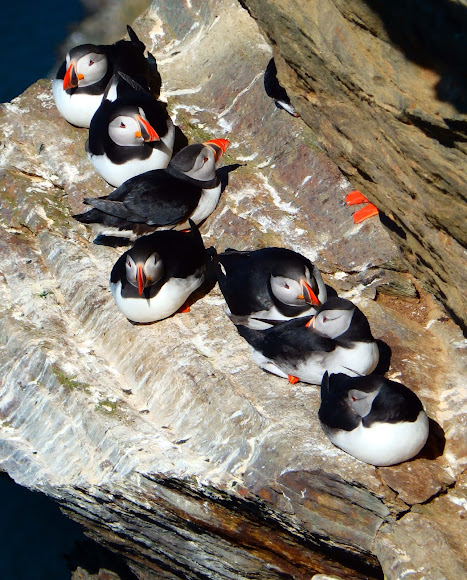 The Atlantic Puffin is a bird of cold northern seas for most of the year. It spends the autumn and winter in the open ocean, returning to land at the start of the breeding season in late spring. There it nests in clifftop colonies, digging a burrow in which a single egg is laid. The chick is mostly fed on whole fish and grows rapidly. After about six weeks it is fully fledged and makes its way at night to the sea. It paddles away from the shore and does not return to land for several years. Both adults and immature birds feed mainly on small fish which they catch while diving underwater, using their wings for propulsion. Colonies are mostly on islands where there are no terrestrial predators but adult birds and newly fledged chicks are at risk of attacks from the air by gulls and skuas. Sometimes a thieving bird such as an Arctic Skua will harass a Puffin arriving with a beakful of fish, causing it to drop its catch. The striking appearance, large colourful bill, waddling gait and behaviour of this bird have given rise to nicknames such as "clown of the sea" and "sea parrot".

They always look so relaxed. ;) Beautiful series of phtos.

In spite of the sun it was cold and windy so indeed they found there a cozy place, hidden from the wind and sunny, enough to doze off a bit :-)

Chilling in the sun. :-) Lovely series!

Thanks for the nice comments :-)

Let me be the first to favourite these excellent photos. Great spotting of such wonderful and unusual birds.