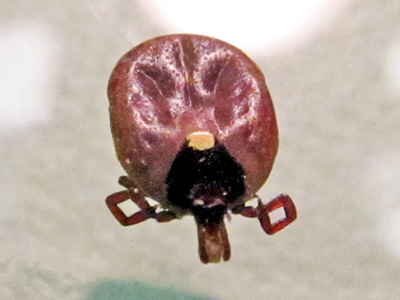 The most common tick in central Virginia. This is an adult female, partially engorged after feeding on a dog. The whitish spot on the back of the scutum (shield) gives the tick its common name. The mouthparts (hypostome and palps) are relatively long.

The lone star tick can be found in woods and grassy areas.

Lone star ticks are known vectors of tularemia and ehrlichiosis, but do not transmit Lyme disease. A poorly understood condition called southern tick-associated rash illness (STARI) is also caused by lone star tick bites, but the mechanism of infection is unknown (attempts to connect the disease with Borellia longstari have been unsuccessful). Some people bitten by lone star ticks develop an allergy to meat (from mammals, not poultry or fish).