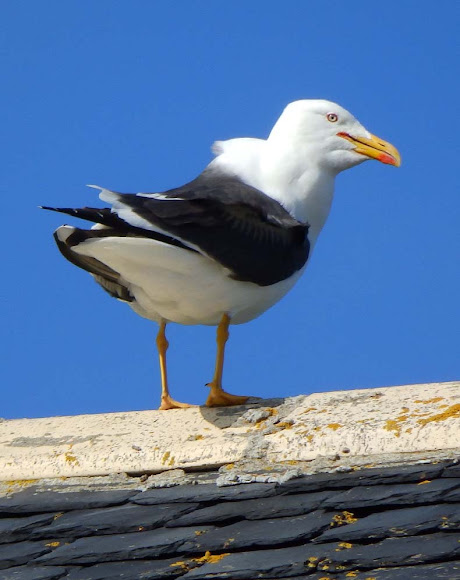 is the largest member of the gull family and the largest gull of the world. It is 64–79 cm (25–31 in) long with a 1.5–1.7 m (4 ft 10 in–5 ft 7 in) wingspan and a body weight of 0.75–2.3 kg (1.7–5.1 lb). The adult Great Black-backed Gull is fairly distinctive, as no other very large gull with blackish coloration on its upper-wings generally occurs in the North Atlantic. In other white-headed North Atlantic gulls, the mantle is generally a lighter gray color and, in some species, it is a light powdery color or even pinkish. It is grayish-black on the wings and back, with conspicuous, contrasting white "mirrors" at the wing tips. The legs are pinkish, and the bill is yellow or yellow-pink with some orange or red near tip of lower bill. Like most gulls, Great Black-backed Gulls are opportunistic feeders. They will investigate any small organism they encounter and will readily eat almost anything that they can swallow.

This species can be found breeding in coastal areas from the extreme northwest portion of Russia, through much of coastal Scandinavia, on the Baltic Sea coasts, to the coasts of northwestern France, the United Kingdom and Ireland. The Great Black-backed Gull is found in a variety of coastal habitats, including rocky and sandy coasts and estuaries, as well as inland wetland habitats, such as lakes, ponds, rivers, wet fields and moorland.

Brilliant! Thanks Marta, they are all excellent photos!

Sure, Debbie, thanks for the invite! I was in fact trying to find a local mission for them :-)

Hi Marta, could you possibly join my Birds of Britain mission and add all of your lovely birds you found in Scotland to it please? :-)
http://www.projectnoah.org/missions/2236...
Thanks.