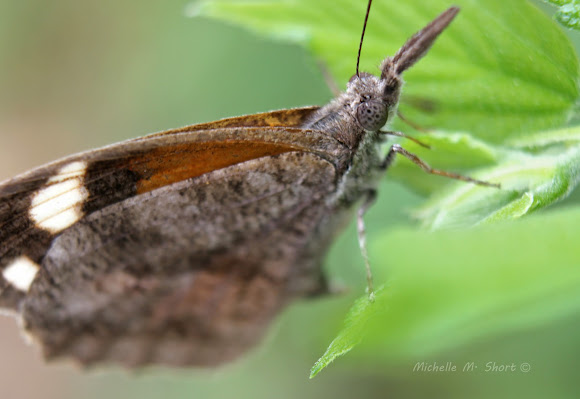 Adult American snouts have greatly elongated labial palps (mouthparts) that make them seem to have long “noses.” There is only one species of snout butterfly in Missouri. Forewings are elongated with squared-off wingtips. The dorsal wing pattern is orange with wide dark borders with white spots. Seen from below on perched specimens, the wings usually only show mottled brown and gray, though the forewings look roughly the same on both sides. When perched on a twig, with only the gray showing, a snout butterfly is virtually invisible.

Woods, woodland edges and suburban yards. This is a migratory species. The first individuals arrive in Missouri from the south in May. They are much more common near the end of summer. Some years there are immense migrations. Such fluctuations occur when an early drought lowers populations of the butterfly’s various predators, and then heavy summer rains cause the host plants to grow profusely. Foods: Larvae feed on various hackberries (genus Celtis: hackberry, dwarf hackberry and sugarberry). They generally rest along the midribs of the leaves they feed on, which helps protect them from predators. The adults visit a variety of flowers and drink from mud puddles and moist soils near creeks and lakes.

I found these 2 butterflies in my backyard among the flowering vines I maintain to attract bugs & butterflies with on the same day here in Joplin, Missouri.