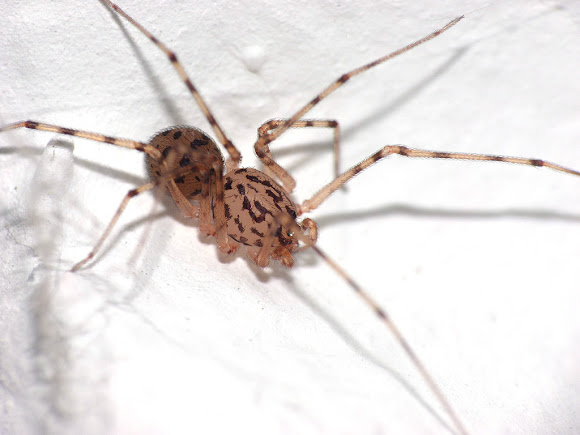 SIZE: ♀ 4-6 mm - ♂ 3-4 mm
6 eyes instead of 8 (Haplogynae) - the prosoma has a circular shape and the end is much higher than the front - the prosoma appears to be a tiny bit bigger than the abdomen - body yellowish to light-brown with dark-brown spots - legs with dark-brown rings - overall it looks quite fragile
It's a nocturnal animal. When other insects go to sleep it starts to hunt. It moves rather slow, but it doesn't need to hurry since it's not chasing after its prey but spitting venomous silk on it.

Loves it warm. In South-Europe it can be found outside under stones, whereas in Germany it only lives in buildings.
DISTRIBUTION: almost worldwide. Holarctic, Australia, and on some oceanic islands in the Pacific. In Europe the species is missing in the North and East.

Last night I entered the bathroom and noticed a small spider at the wall. First thought was "some cobweb spider maybe", but the way she moved was a bit different. "We have a guest in the bathroom, wanna take a look?" - "Ah, nice. Hm, maybe a spitting spider?" ツ I instantly fetched my camera, climbed on a stool since the spider already moved up to the ceiling, zoomed - and my heart was filled with joy as I could see clearly it was really a spitting spider :D I've only seen it once before (also in our apartment), years ago, and ever since wished to see it again - and finally there it was :D I'm still excited :D They are so beautiful and interesting :D

And yes, there are cobwebs at my ceiling, I should tidy it up - but to be honest they don't bother me and somehow I even like it. They are traces of other living beings that like to live with us in these rooms :-p