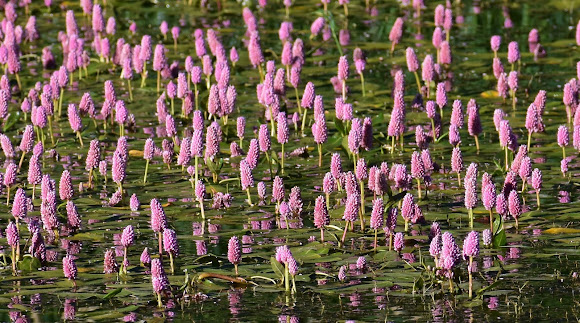 Persicaria amphibia (syn. Polygonum amphibium) is a species of flowering plant in the knotweed family also known as longroot smartweed. Thick spikes of bright pink flowers borne on a thick, naked stalk above the alternate, oval, leathery green leaves characterizes water smartweed. When growing on land, the stems are erect to decumbent and densely pubescent (as are the leaves) and the leaf blades have sharp-pointed tips. Plants growing underwater have glabrous (hairless) stems, leaves, and blunt-tipped leaf blades.

Spotted in a pond in a sagebrush - scrub land area. This species is an amphibious plant (true to its Latin name), capable of thriving not only in water but in mud or even a moist meadow.

Water smartweeds have a long history of human use. Several Plains Indian tribes used the species as a food source, while other groups derived medicines from the roots, stems, and leaves. The term smartweed is thought to be a more sanitized version of the original word “arsmart” for the use of the plant in medieval times to relieve itching and swelling of the human posterior. More recently, scientists in England have found that Water smartweeds growing in old gold mine tailings can accumulate trace amounts of gold into their tissues at levels significantly higher than expected from background levels. Some have suggested the plant could be used as a bioassay of useful minerals or to clean up badly polluted sites.

Thank maplemoth for you kind comments.

Thank you Maria for commenting.

Thank you Ashley for being nominated.