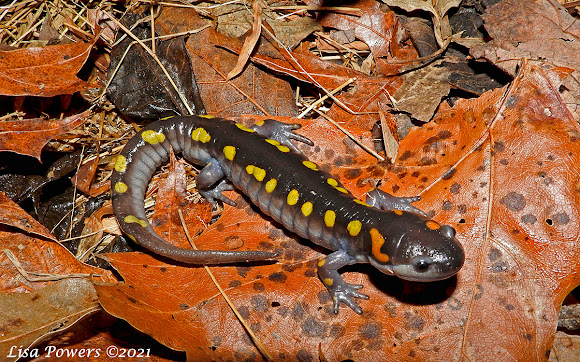 Young adult male approximately 15cm long. It had a nice purple-black dorsum. The double row of bright yellow spots some of which were fused together, were more lateral than dorsal.

This animal was found in a semi-rural area that was previously agricultural fields scattered with patches of forest. Homes/farmsteads currently occupy the area with hay fields and pasureland are still abundant.

It was found crossing a paved road during a rainy night. The air temperature was under 8.33 C. Animal was photographed and released back where found just off the road in the direction it was found. It belongs to the family Ambystomatidae known as the mole salamanders. They spend much of their life buried in the ground or deep in leaf litter or under logs/rocks during active periods. They breed en masse in the late winter/early spring in vernal pools and fishless ponds.