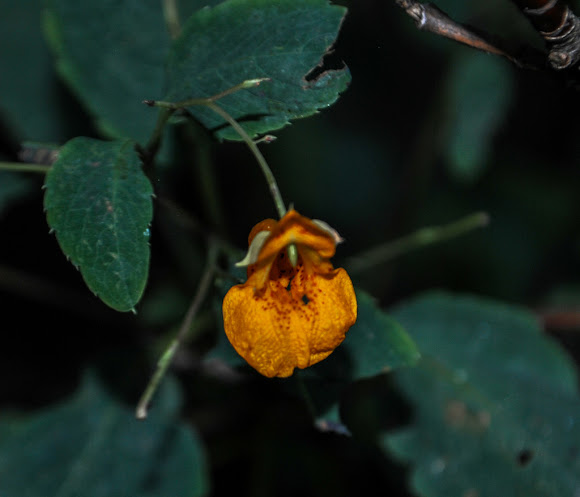 Impatiens capensis, commonly called spotted touch-me-not or jewelweed, is a native annual plant of boggy, shady areas. It typically occurs in low woodlands and thickets, along stream banks and in swampy areas. It grows 2-5' tall on weak, watery stems. Features 1" long, rear-spurred, cornucopia-shaped, orange to orange-yellow flowers with reddish-brown spotting. Flowers bloom throughout the summer. Each flower dangles from a leaf axil on its own slender stalk. Flowers give way to slender seed capsules which when ripe explosively split open at a touch dispersing the tiny seeds within in all directions, hence the common name of touch-me-not. Oval, coarsely-toothed, bluish-green leaves (to 3.5" long). Native Americans used the watery plant juices to relieve itching associated with poison ivy, stinging nettle and insect bites. Genus name comes from the Latin word impatiens meaning impatient in reference to the violent seed discharge from the ripe pods. Specific epithet means of the Cape of Good Hope, South Africa, but this is a misnomer here as this plant is native to North America. Dew or rain beads up on the leaves forming sparkling droplets which give rise to the common name of jewelweed.