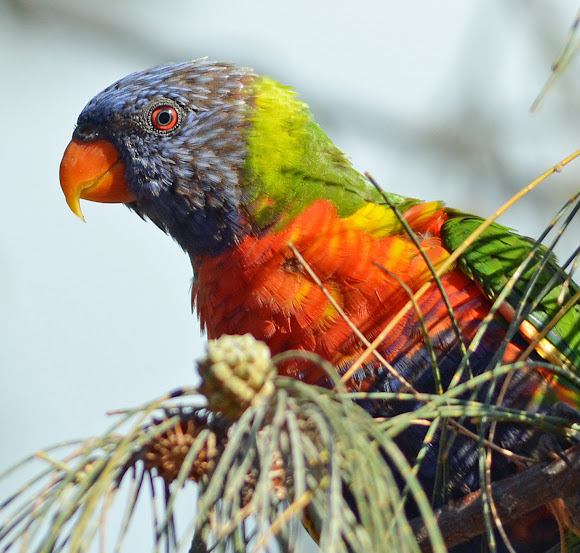 The rainbow lorikeet is a small parrot, unmistakable with its bright red beak and colourful plumage. Rainbow lorikeets are very noisy, continuously screeching while in ﬂight, at food sources and at roosts. They have a swift direct ﬂight. See the complete series for pictures of the whole bird.

Various colour forms of this bird are found in south and east Indonesia, New Guinea, the Solomon Islands, Vanuatu, New Caledonia and the north and east of Australia. There is an introduced population in Perth, and intentional releases have occurred in Auckland, New Zealand. Rainbow lorikeets feed mainly on fruit, pollen and nectar. On the first 3 shots the bird is seen feeding on a sheoak (Allocasuarina sp.), a genus of trees in the flowering plant family Casuarinaceae endemic to Australia.

Thank you flowntheloop :-) They are a riot of colors... and incredibly noisy!

WOW!! What a beauty!

Thanks Hema! To me they look mischievous. And they often are :-)

Thanks Satyen! I'm glad you liked it.