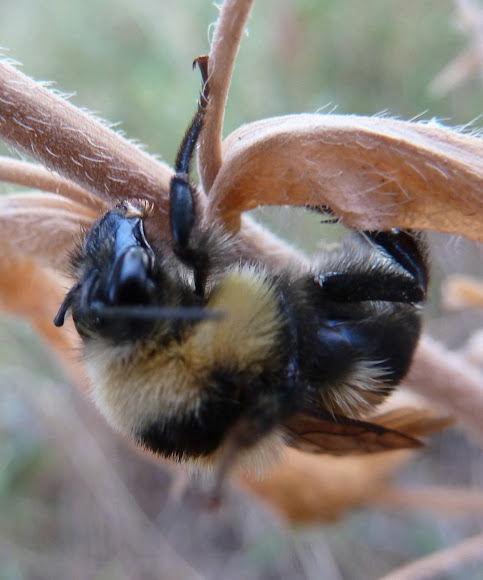 A fairly small bumblebee, with body lengths around 16 mm (queen), 12 mm (worker) and 12 mm (male). The queen has an average wingspan of 29 mm. The face and proboscis (tongue) are short. Females (queens and workers) have a predominantly black abdomen with a yellow collar, the first and sometimes second terga yellow, and a white tail. The face is black, occasionally with a patch of yellow fur on the top. Males are similar, but with more yellow; the yellow collar continues on the ventral side, the two first terga are always yellow, and there is much more yellow fur on the face. However, there are darker forms of the females, as well as forms (sometimes considered subspecies) that differ in the amount of yellow in the fur, and with brownish hairs on the white tail.

It is widely distributed in Europe and northern Asia, as well as northern North America. The distribution of B. jonellus is very wide : from Iceland and the Sierra Cantabrica (ssp. yarrowianus) in the west to the Anadyr on the Pacific. In the north, the species is present beyond the Arctic Circle. According to Løken ( 1973), it is as common as B. pratorum throughout Scandinavia (ssp. subborealis). In the British Is., Alford (1975) notes that B. jonellus is more common than B. pratorum in Scotland. In Russia, the distribution of B. jonellus is continuous north of the 55th parallel and rather patchy south of this latitude. In the south of Europe, the range of B. jonellus is restricted to more particular, most often montane biotopes, reaching the highest mountains of the Iberian Peninsula where it is very rare. It is found in gardens, meadows as well as on heath and moorland. The bumblebee visits various food sources as clover, bird's-foot trefoil, cowberry, thistles and many others.

Tnx Mark, again something spotted accidentally while I was coming back from the beach ;) and even better it was getting ready to sleep so I couldn't finally get some decent photos of a bumblebee, they are usually so impatient when they are searching for food ;)