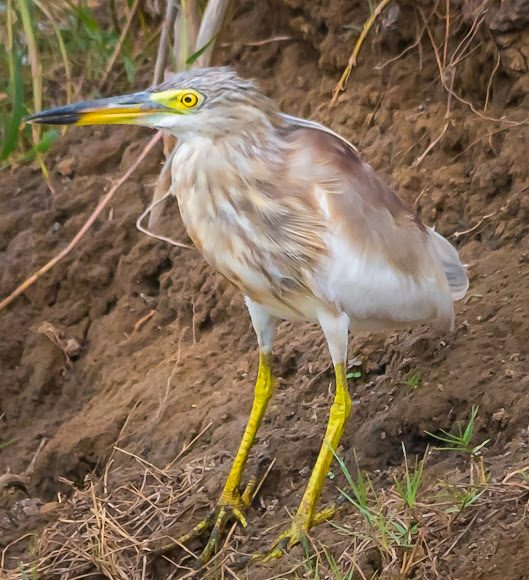 Udawalawe National Park. The Indian pond heron or paddybird (Ardeola grayii) is a small heron. It is of Old World origins, breeding in southern Iran and east to the Indian subcontinent, Burma, and Sri Lanka. They are widespread and common but can be easily missed when they stalk prey at the edge of small water-bodies or even when they roost close to human habitations. They are however distinctive when they take off with bright white wings flashing in contrast to the cryptic streaked olive and brown colours of the body. Their camouflage is so excellent that they can be approached closely before they take to flight, a behaviour which has resulted in folk names and beliefs that the birds are short-sighted or blind.

The national park was created to provide a sanctuary for wild animals displaced by the construction of the Udawalawe Reservoir on the Walawe River, as well as to protect the catchment of the reservoir. The reserve covers 30,821 hectares (119.00 sq mi) of land area and was established on 30 June 1972. Udawalawe is an important habitat for water birds and Sri Lankan elephants. Udawalawe lies on the boundary of Sri Lanka's wet and dry zones. Plains dominate the topography, though there are also some mountainous areas. The Kalthota Range and Diyawini Falls are in the north of the park and the outcrops of Bambaragala and Reminikotha lie within it. The park has an annual rainfall of 1,500 millimetres (59 in), most of which falls during the months of October to January and March to May. The average annual temperature is about 27–28 °C (81–82 °F), while relative humidity varies from 70% to 83%. Well-drained reddish-brown soil is the predominant soil type, with poorly drained low humic grey soils found in the valley bottoms. Mainly alluvial soils form the beds of water courses. The habitat surrounding at the reservoir includes marshes, the Walawe river and its tributaries, forests and grasslands. Dead trees standing in the reservoir are visual reminders of the extent of forest cover before the construction of the Udawalawe Dam. Areas of open grassland are abundant as a result of former chena farming practices.

I agree with the ID suggestion given by I- munasinghe.