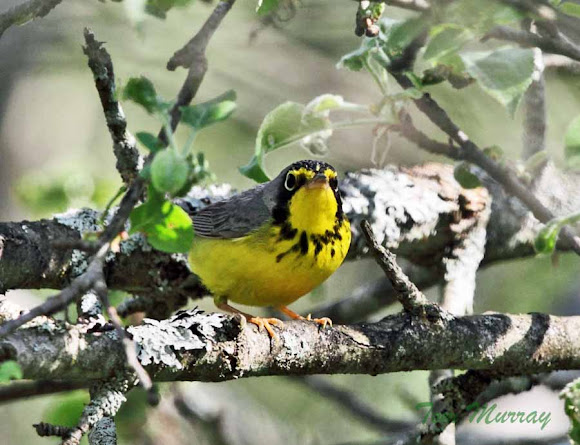 Another of the many warblers feeding on caterpillars at Heald Orchard conservation land. Canada Warblers usually stay back in the trees and rarely come out in the open, and this one was no exception.

A colorful, active warbler of northern forests, the Canada Warbler spends little time on its breeding grounds. It is one of the last warblers to arrive north in the spring, and one of the first to leave in the fall, heading early to its South American wintering grounds. (Cornell)

Thanks Ann, venusflytrap and Fyn. It's amazing how such little birds can migrate from Costa Rica to Maine.

This species should be getting here soon. They breed in the woods behind my house.

On very rare occasions, this fellow has wandered through my backyard in Costa Rica. Very impressed with your warblers - they are so hard to photograph!