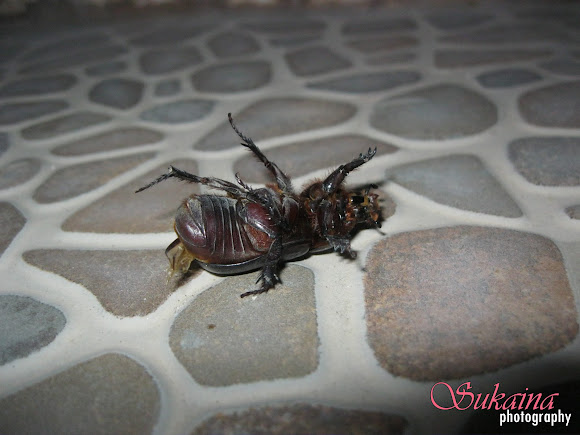 This insect is called Al-Angar in some areas of the Kingdom. It has shiny black or brown color. The length of its body is about 35 mm. It has a long protrusion on the top of the head and it curves backward looking like antenna in the female while it is short and does not curve in the male. This antenna is surrounded with a tuft of dense hairs. The forewings are elytral and covered with short bright fur, while the hind-wings are membranous and used in flying. On the upper surface of the fore-thorax, there is a deep and wide depression in the female while in the male, this depression is small and shallow.

This insect is found in all regions of the Kingdom, especially the eastern region and the areas cultivated with date palm. It is widely distributed in east and north Asia, including western Arab region.

We called it in Arabic (khunfisa) it is the meaning of a beetle. From watching her I noticed that if it turned upside down it can not turn up again.