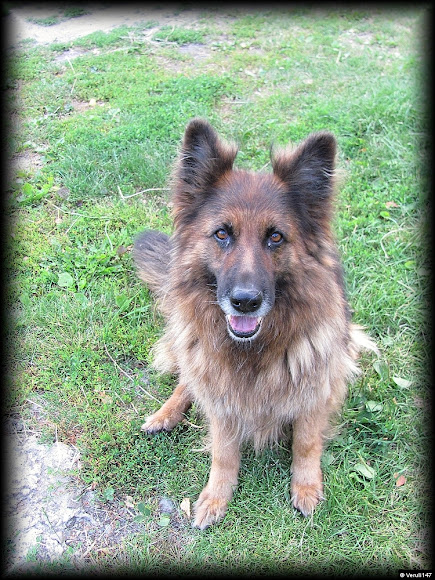 The German Shepherdis a breed of large-sized dog that originated in Germany. German Shepherds are a relatively new breed of dog, with their origin dating to 1899. As part of the Herding Group, German Shepherds are working dogs developed originally for herding and guarding sheep. Since that time, however, because of their strength, intelligence, trainability, and obedience, German Shepherds around the world are often the preferred breed for many types of work, including search-and-rescue, police and military roles, and even acting. German Shepherds currently account for 4.6% of all dogs registered with the American Kennel Club.

It's shepherd with long hair. It is special for them. It's female.

Yes, it female. It is really German Shepherd, we have got documents about it. :-)
There is link to the Czech webpage about this dog: http://www.dlouhosrstynemeckyovcak.borec...

ok, tnx! but it also looks not so big...maybe its a female

By the way. All domestic dogs have the scientific name of Canis lupus familiaris.

Nice looking dog! I have seen long coated German Shepherd Dogs. It does occur in the breed (you can do a quick search online to see other examples.

Maybe this one is not pure breed, too long hair don't you think?