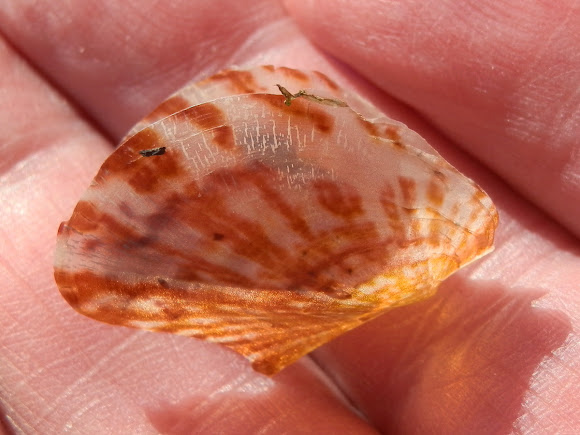 A bivalve with paper-thin shells and about 40 mm wide. It had broken orange bands radiating from the umbo (where the valves are hinged). A very fragile specimen that was surprisingly intact despite being blown about in the wind.
The slightly flared part of the shell near the umbo ( on the Lt side in Pic 1) is called the auricle or wing, giving the species it's common name.

Spotted in the high tide area of the beach along with other shells & washed up sea weed - Rickett's Point ( Port Philip Bay)
Occurrence record:
https://bie.ala.org.au/species/urn:lsid:...

The name Electroma virens is no longer accepted. Have amended the scientific name.
The bivalve feeds on organic matter on or near the sea floor from 1 to 30 mts.
Class: Bivalvia Subclass: Pteriomorphia Order: Pterioida Superfamily: Pterioidea Family: Pteriidae