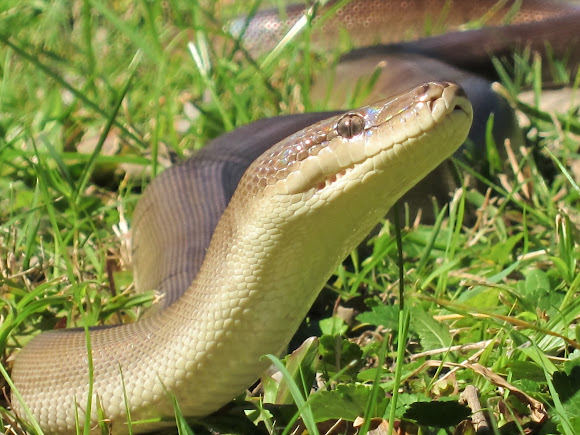 This is an Olive Python (Liasis olivaceus olivaceus), and what a beautiful animal it is. Growing to almost 4 mtrs, this python is Australia’s second largest snake species. There is also another Olive Python sub species – the Pilbara Olive Python (Liasis olivaceus barroni) that is only found in the Pilbara region of WA. Its scale configuration is slightly different and the snakes grow slightly larger, with snakes up to 6.5 mtrs long being reported. Unfortunately, the Olive Python is occasionally confused with the venomous King Brown snake (Pseudechis australis), and killed as a consequence.

This specimen is a captive animal, but as a species they prefer rocky areas, gorges and especially rocky areas near sources of water. Typically, shelter is sought in caves and rock crevices, but individuals have also been found in hollow logs and in burrows under rocks.

Just happy to be out in the sun on a warm winters day. This specimen was well over 2 mtrs long. Very docile and well-mannered, and a really handsome snake.

Thanks, Jae. This one was a beauty, but has a lot more growing to do. They are naturally occurring in Australia's north, and I've heard of monster specimens being found in Western Australia's Pilbara region. Captive or not, I was delighted to meet this beautiful snake.

Gorgeous snake! I have a soft spot for pythons and especially this species. A very strong snake, but luckily they usually are friendly and curious. Too bad I've only seen them in captivity and not in the wild. Thanks for sharing this, Neil!

Yeah I thought so too. It seemed to like me and kept following me around the yard. It's size freaked me out a bit so I would have much preferred it be adorable from a distance, but this was good therapy for me. Part of the hsndler's mission is to help people overcome their fear of snakes. This and the other two snakes in my portfolio are displayed for that very reason. I want to see more! Frightened or not, they fascinate me.

Has a kind of adorable look on its face.

Thanks, Shanna. It certainly was, and very placid. I don't know what I expected from a large snake, but this fellow seemed quite casual.