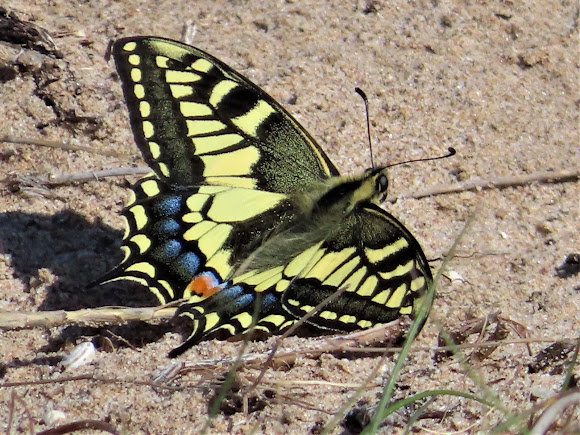 The adults, with a slow flight, are characterized by the presence of ocelli (false eyes) on their hind wings, which together with the "tails" or extensions of the wings themselves, which simulate antennae, confuse the predators that will attack what they they who are the head of the insect believe that there is a possibility for the butterfly to escape.

Dune area next to the Mediterranean Sea. El Saler (Valencia). We can see it in our fields, as long as its nutritious plant is present in the area. They mainly feed on fennel (Foeniculus vulgaris) although they can feed on other umbelliferae or plants such as rue (Ruta sp.). Adults fly in open places, frequenting meadows and wastelands where they sip nectar from flowers.

They are disappearing lately due to the destruction or deterioration of their natural habitat; the elimination of the borders of roads by means of mowing or herbicides, the fires of the pastures and the use of insecticides indiscriminately damage a lot to this species, which in some parts of the world is legally protected, at least at a theoretical level, being classified as a species of special interest.

It looks to be a very healthy specimen. Beautiful.

eulalia rubio a month ago

Sergio Monteiro a month ago