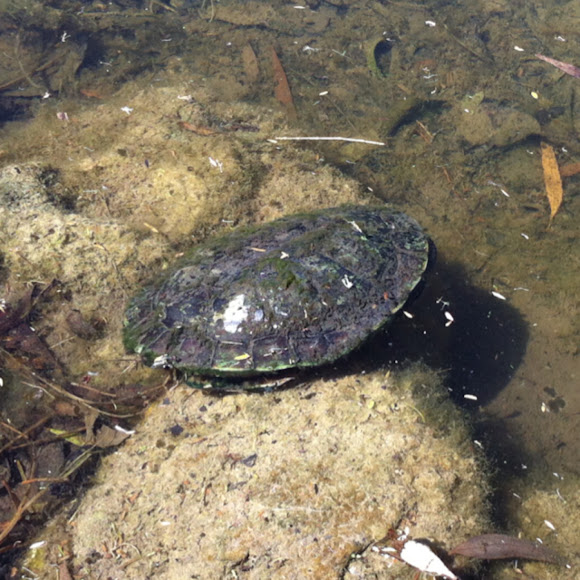 Also referred to as a Snake-Necked Turtle, the Eastern Long-Neck's shell will eventually grow to around 25cm in length, with its neck almost the same length. The upper shell or carapace can vary in colour from light reddish-brown to almost black, while the lower shell or plastron is usually creamy-yellow, sometimes with other dark brown markings. The feet have strong claws and are webbed for swimming. The jaws are made of hard, horn-like material and, if provoked, can deliver a painful bite.

This is an extremely common turtle in eastern Australia and South Australia, while other long-necked species occur in northern and western Australia. They inhabit almost any type of relatively slow moving water body from farm dams to major rivers and lakes. This little guy was crossing my path on the walking trail and was about the size of a bread n' butter plate. There is an area of Mount Gambier Crater Lake park the is gated as it is strictly a native conservation area, for plants and animals.

Diet: These turtles prey mostly on fish, tadpoles, frogs and crayfish. The long neck is used like a snake to rapidly strike at passing prey. Large food items are torn apart by the strong front claws. Reproduction: The female lays between 4-20 hard-shelled eggs during spring and early summer in an excavation in the bank of a swamp or stream. The young tortoises usually hatch after an incubation time ranging from three to eight months. Some females may produce two or three clutches in one season. My information came from this website: http://www.reptilepark.com.au/animalprof...

Is that the web link you gave before?

Sure thing :) Australia has a great website for all amphibians and reptiles in each territory, makes my life way easier!

Finally had time to check it out, and I think you might be right Ashley with the Chelodina longicollis , good eye and thanks again :-)

Thanks for the info, will be looking right into it!

According to this website, only 3 turtles are in South Australia, and only 1 in your specific area, although the other 2 are very close by. Theoretically, it should only be Chelodina longicollis, but I know nothing about Australia turtles, so here is the link and you can decide for yourself: http://www.kingsnake.com/oz/turtles/turt...