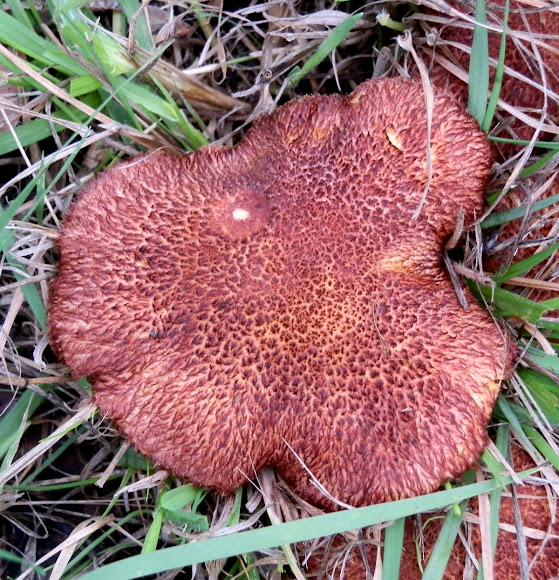 Attractive clump of mushrooms with the largest cap about 70 mm wide. The caps were pale yellow covered with deep plum coloured fibrils . Gills were crowded and a bright yellow. The base colour of the thick stipes was also yellow but stipes had small fibrils the same as the cap, giving it a maroonish tinge. Spore print (pic 6) was white. Note: These mushrooms resemble Gymnopilus dilepis in their colour scheme but G.dilepis has a yellow-brown spore print.

Spotted growing on the ground ( probably from buried wood) in a clearing in a eucalyptus forest.

This species is associated with pine trees. A native of the Northern Hemisphere, it was accidentally introduced into Australia. Documents about west Australian fungi report that this species is seen to be saprobic on a variety of wood, including Banksia. In this case, they could be growing from pine wood chip mulch dumped here or a buried pine tree stump. So, nnot related to eucalyptus trees. I could not find information relating gum trees with this species but would like to know if any one comes across any such documentation. Thanks.
Family: Tricholomataceae