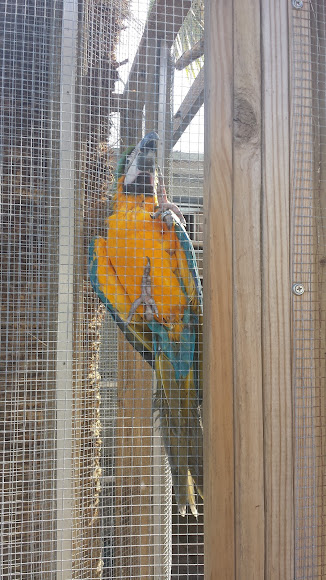 The Blue-fronted Amazon is a mainly green parrot about 38 cm (15 in) long. They have blue feathers on the forehead above the beak and yellow on the face and crown. Distribution of blue and yellow varies greatly among individuals. Unlike most other Amazona parrots, its beak is mostly black. There is no overt sexual dimorphism in plumage to the human eye, but analysis of the feathers using spectrometry, a method which allows the plumage to be seen as it would be by a parrot's tetrachromatic vision, shows clear differences between the plumage of the sexes. Juveniles of parrots are duller and have dark irises.

The range of the Blue-fronted Amazon extends over eastern and northern Bolivia, eastern Brazil, Paraguay and northern Argentina. It is found in forests (though generally avoids extensive humid forests such as the Amazon), woodland, savanna and palm groves. A small feral breeding population is also present in the greener regions of Stuttgart in Germany.

Was this bird at a zoo or maybe someone'ls home? This is a species of Macaw. Blue-fronted Amazons are much smaller and have different coloration. http://en.wikipedia.org/wiki/Blue-fronte...