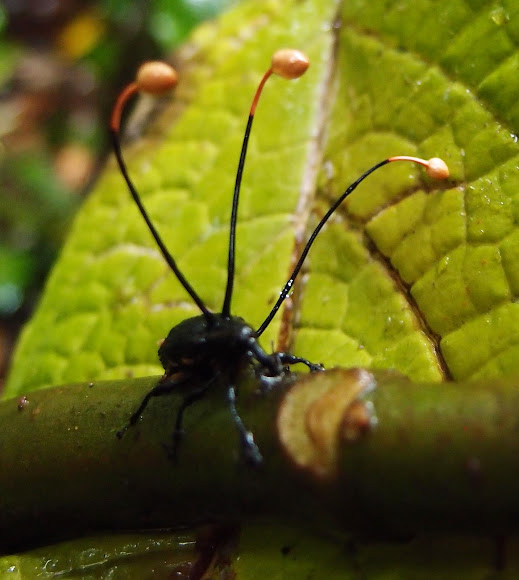 A weevil that has been killed by an entopathogenic (insect-parasitic) Cordyceps fungus, the fruiting body of which can be seen growing from the victim’s back. The inside of the weevil will be a mass of fungal hyphae. Cordyceps is a genus of ascomycete fungi (sac fungi) whose species are all endoparasitoids, parasitic mainly on insects and other arthropods (they are thus entomopathogenic fungi). When a Cordyceps fungus attacks a host, the mycelium invades and eventually replaces the host tissue, while the elongated fruiting body (ascocarp) may be cylindrical, branched, or of complex shape. The ascocarp bears many small, flask-shaped perithecia containing asci. These, in turn, contain thread-like ascospores, which usually break into fragments and are presumably infective. Some current and former Cordyceps species are able to affect the behaviour of their insect host: Ophiocordyceps unilateralis (formerly Cordyceps unilateralis) causes ants to climb a plant and attach there before they die. This ensures the parasite's environment is at an optimal temperature and humidity, and that maximal distribution of the spores from the fruiting body that sprouts out of the dead insect is achieved.

Thanks Jose Miguel, I just saw your invitation to the mission. I will add it now :-)

Would fit great on this mission:
http://www.projectnoah.org/missions/1159...

Many thanks Michel! I was also really happy to see this. Making a sharp picture was tricky though, because at the moment was raining and windy and dark inside the forest, but I guess is enough to show the type of fungus and its bizarre story :-)

Thank you Rob. It was a very unique finding!