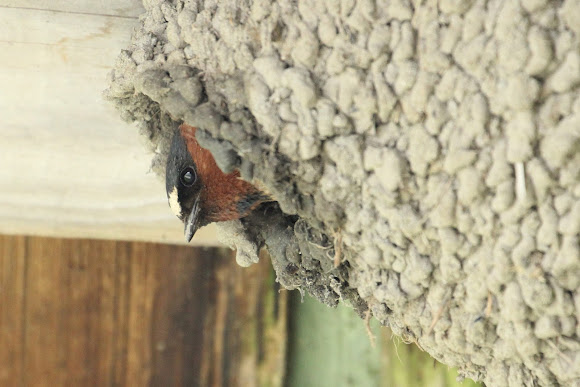 Rich rust, black and buff coloured swallow with a buff patch above the beak and on the rump. Build nest colonies out of mud under eaves or bridges or ?

A re-established colony after many years! Some over-zealous do-good, removed all the nests years ago and totally removed any evidence of a colony on the north tower of the Katzie Marsh beside Pitt Lake, BC. Thankfully, the swallows have found the tower again and re-established this perfect location for a colony. They have the marsh and the lake to hunt insects over and the colony is so well protected in this tower.(Except from humans!)

Loved to watch them flying back and forth to their nests. Some nests seemed to have new parts added on and others seemed to be empty.

Thanks Jemma! It was just wonderful to stand there and watch that colony for a while. Happy for a breeding success story for birds!