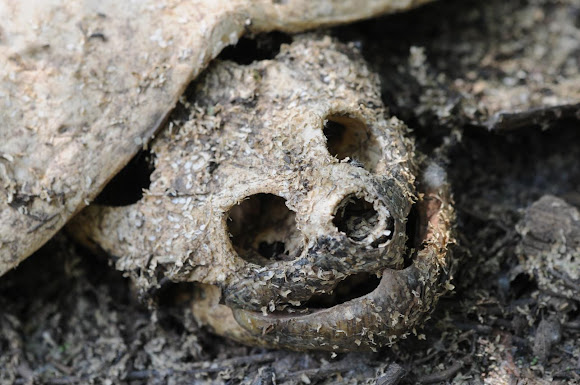 Chelydra serpentina have rugged, muscular builds with ridged carapaces (though ridges tend to be more pronounced in younger individuals). The carapace (upper shell) length in adulthood may be nearly 50 cm (20 in), though 25–47 cm (9.8–19 in), is more common. C. serpentina usually weighs 4.5–16 kg (9.9–35 lb). Any specimen above the aforementioned weights are exceptional, but the heaviest wild specimen caught reportedly weighed 34 kg (75 lb). Snapping turtles kept in captivity can be quite overweight due to overfeeding and have weighed as much as 39 kg (86 lb). In the north part of its range, the snapping turtle is often the heaviest native freshwater turtle. (information from Wikipedia)

This skeleton was found intact and mostly undisturbed.

Missed this one. I did find just the skull of one that had obviously died a pretty long time ago. Just the skull, no lower jaw, shell, or any bones.