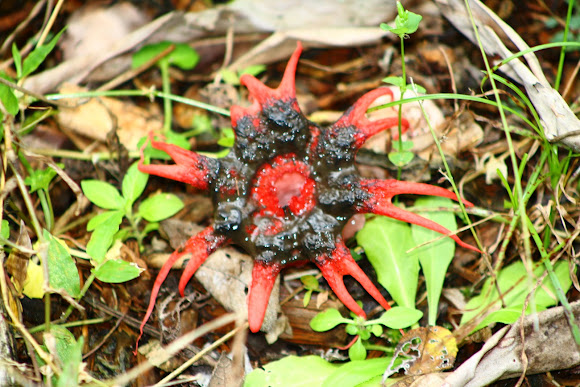 It begins as a partly buried whitish egg-shaped structure 3 cm (1¼ in) in diameter, which bursts open as a hollow white stalk with reddish arms erupts and grows to a height of 10 cm (4 in). It matures into a reddish star-shaped structure with six to ten arms up to 3.5 cm (1½ in) long radiating from the central area. These arms are bifid (deeply divided into two limbs). The top of the fungus is covered with dark olive-brown slime or gleba, which smells of rotting meat. There is a cup-shaped volva at the base that is the remnants of the original egg.

Spotted in damp soils after a lot of rain. There was cluster of around 6 fungi, opening at different times.

The first native Australian fungus to be formally described

They certainly are! You'd be brave to touch them!

So odd but cool

Thanks jemma! Due to the fact that there were so many in one spot it was a case of smelling them before seeing them!