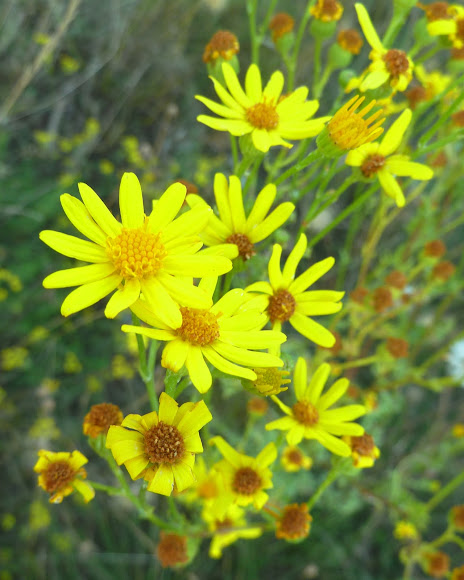 It is a very common wild flower in the family Asteraceae. The plant is generally considered to be biennial but it has the tendency to exhibit perennial properties under certain cultural conditions (such as when subjected to repeated grazing or mowing). The stems are erect, straight, have no or few hairs, and reach a height of 0.3 - 2 m. The leaves are pinnately lobed and the end lobe is blunt. The many names that include the word "stinking" (and Mare's Fart) arise because of the unpleasant smell of the leaves. The hermaphrodite flower heads are 1.5 - 2.5 cm diameter, and are borne in dense, flat-topped clusters; the florets are bright yellow. It has a long flowering period lasting from June to November (In the northern Hemisphere).

It is native to northern Eurasia, usually in dry, open places, and has also been widely distributed as a weed elsewhere. In Europe it is widely spread, from Scandinavia to the Mediterranean. In Britain and Ireland it is listed as a weed.

Other names: tansy ragwort, St. James-wort, Ragweed, Stinking Nanny/Ninny/Willy, Staggerwort, Dog Standard, Cankerwort, Stammerwort and Mare's Fart. In the western US it is generally known as Tansy Ragwort, or "Tansy".