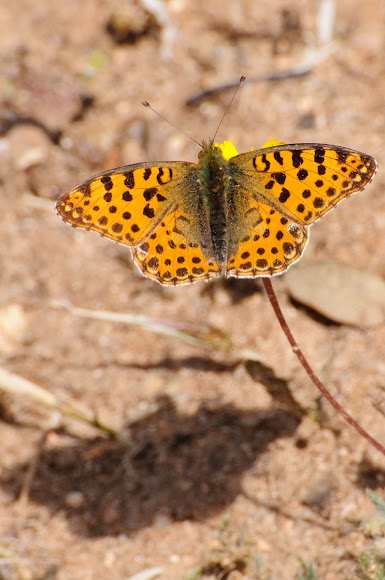 The Queen of Spain Fritillary is a fairly common butterfly in Europe and temperate Asia. The very distinctive large silver spots on the underside hindwings mean that this butterfly is unlikely to be confused with any other species, although early summer specimens could possibly be mistaken in flight for a Pearl-bordered or Small Pearl-bordered Fritillary. In late summer or early autumn they could be confused in flight with a Wall Brown but the differences are obvious as soon as the butterfly settles. Both sexes are very similar in appearance, although the female is slightly larger, with a shorter abdomen and a more greenish hue around the base of the upperside wings. The sexes can more easily be distinguished by their behaviour - females are sedentary, while males actively pursue all passing butterflies. In Europe there are 3 generations of this species, emerging in March/April, July, and September in lowland areas. In montane areas there is usually only a single brood which emerges in late June and remains on the wing until the end of August. Hibernation can occur in any stage of the lifecycle depending on location and climate, but most commonly occurs in the egg stage or as young larvae. The pale straw coloured eggs are conical in shape, with about 40 longitudinal keels. They are laid singly on the stems and leaves of the foodplants, and probably also on surrounding stems and leaf litter. Oviposition sites are invariably in dry sheltered situations where vegetation is sparse. Reportedly as many as 100 eggs can be laid by a single female per day in captivity. The caterpillars are velvety black, heavily sprinkled with tiny white dots, and adorned with rows of dull orange spikes along the back and sides. They feed on field pansy Viola arvensis, wild pansy V. tricolor, and sweet violet V. odorata, but do not normally feed on other Viola species. Prior to pupation the larvae wander aimlessly for 2 or 3 days without feeding, and eventually attach themselves by the tail to a button of silk spun on the underside of a leaf, or a low stem. The pupa, which wriggles frantically if disturbed, is blackish-olive colour, marked with small white patches on the abdomen, which is adorned with a series of stubby white spikes. It bears a strong resemblance to a bird dropping. The adult butterflies emerge in the morning, about 10-12 days after pupation. Both sexes visit a wide variety of flowers for nectar, including thistles, hawkbit, cow parsley, thyme, dandelion, hemp agrimony, marjoram, yarrow and bramble blossom. When nectaring the wings are normally held almost fully outspread. In the Alps and Pyrenees I have often seen males imbibing at the edge of puddles, and at these times the wings are normally held erect.

Spotted in a Holm oak and pine tree forest

Sometimes it is difficult to see the silver spots on underside of hindwings :)))