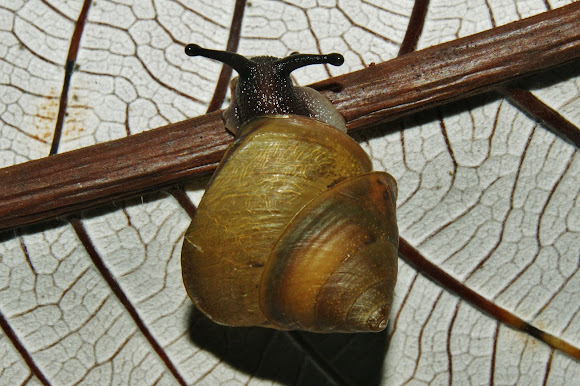 Shell trochiform, fragile, sharply keeled, finely sculptured, and imperforate. Color a uniform, medium golden to olivaceous brown with a single dark brown band just below the periphery. In some specimens there is an indication of an additional brown band just above the keel.Whorls 5^, nearlystraight sided and sharply keeled; slightly concave above the keel and slightly convex below. Spire extended and produced at an angle of about 80°. Aperture ovate, depressed slightly downward, and produced at an angle of about 42" from the base. Palatal lip thin, narrow, white and slightly reflected. Parietal wall thinly glazed. Columella short, not noticeably thickened and curving into the base of the outer lip. Suture well marked but not impressed. Axial sculpture consisting of fine growth lines which become coarser on the later whorls. Spiral sculpture consisting of numerous fine and somewhat irregular threads. Nuclear whorls H and smooth. Mantle a rather uniform light chocolate-brown with a dark brown subperipheral stripe. Foot light brown, darkening posteriorly.