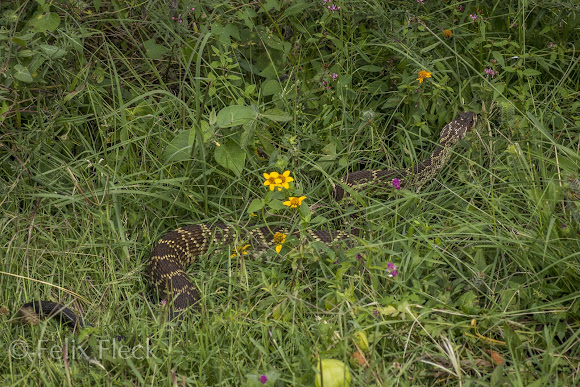 About 90cm long. Brown colouration which becomes lighter on the flanks; pale yellow cross bands run from the head to the beginning of the tail; the tail is completely black, which gives the species its common name. This species is considered one of the more docile rattlers and bites are rare. It is venomous, though, but the toxicity is somewhat lower than other rattlers. This particular specimen rattled strongly and proceeded to, rather slowly, move toward a tree and assume its defensive S-shaped position against the tree trunk (picture #3).

Yeah! My first sighting of a rattler, and I get such an impressive one!

Wow. Impressive rattler! Must be an old guy.